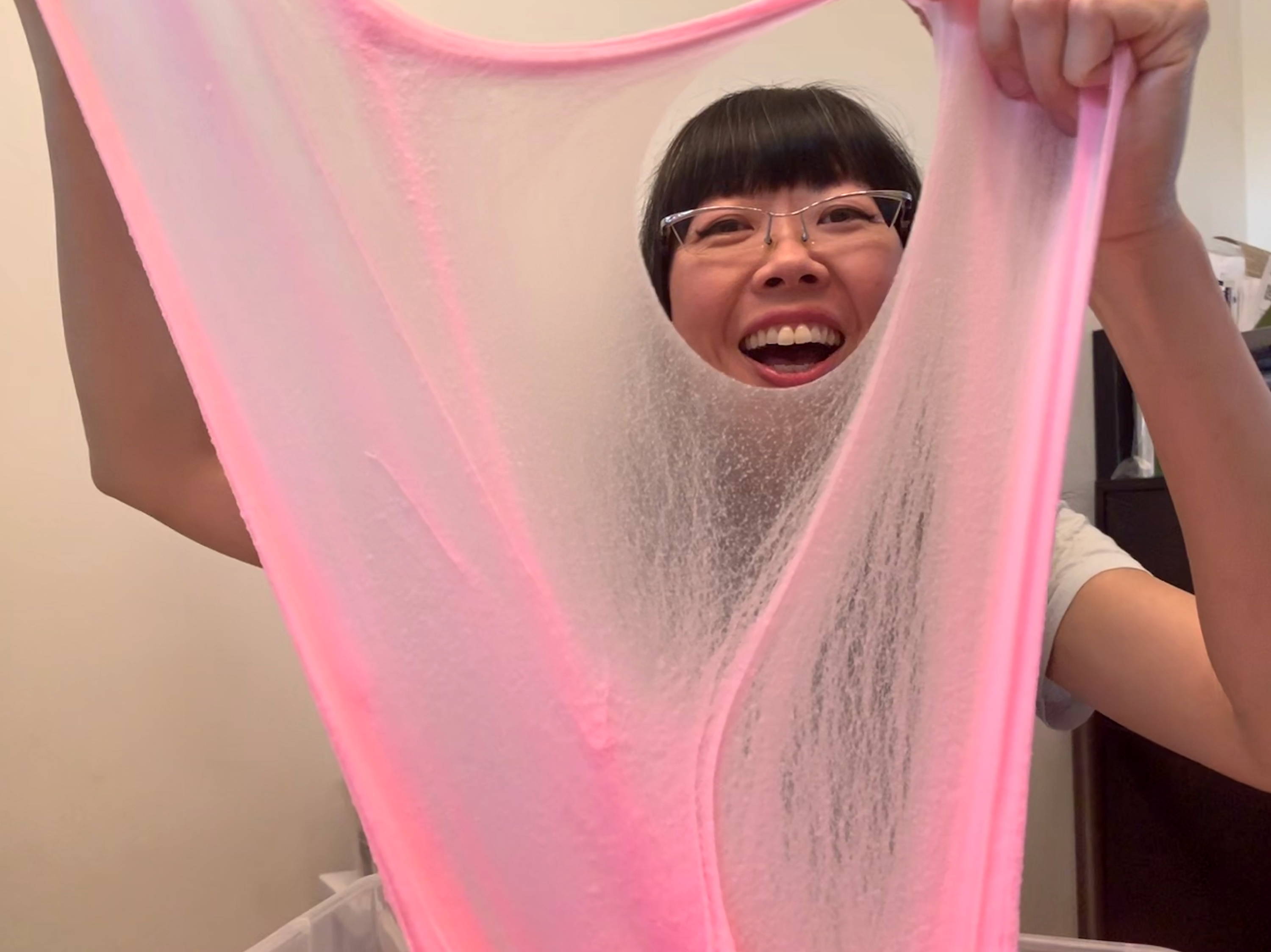 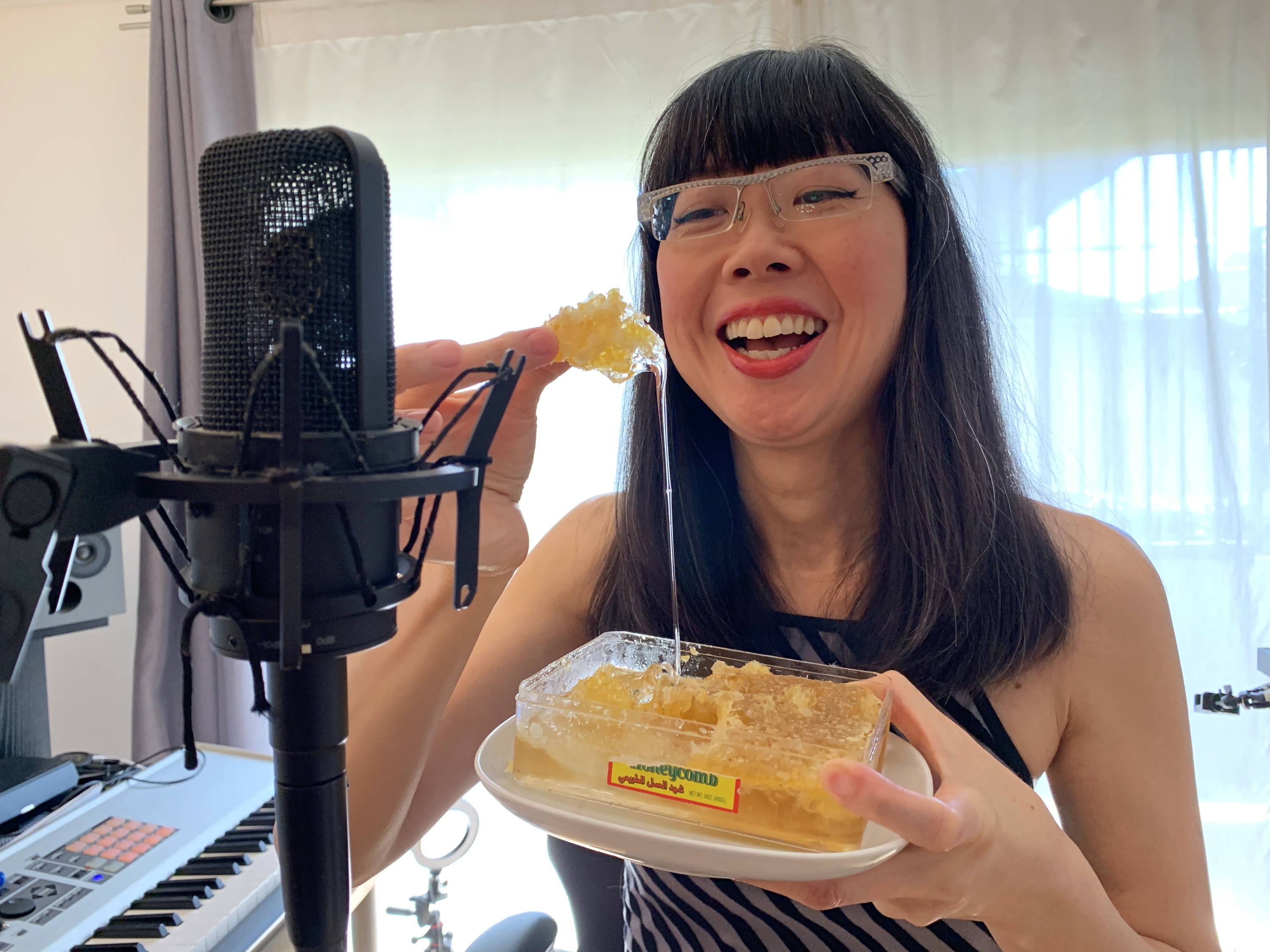 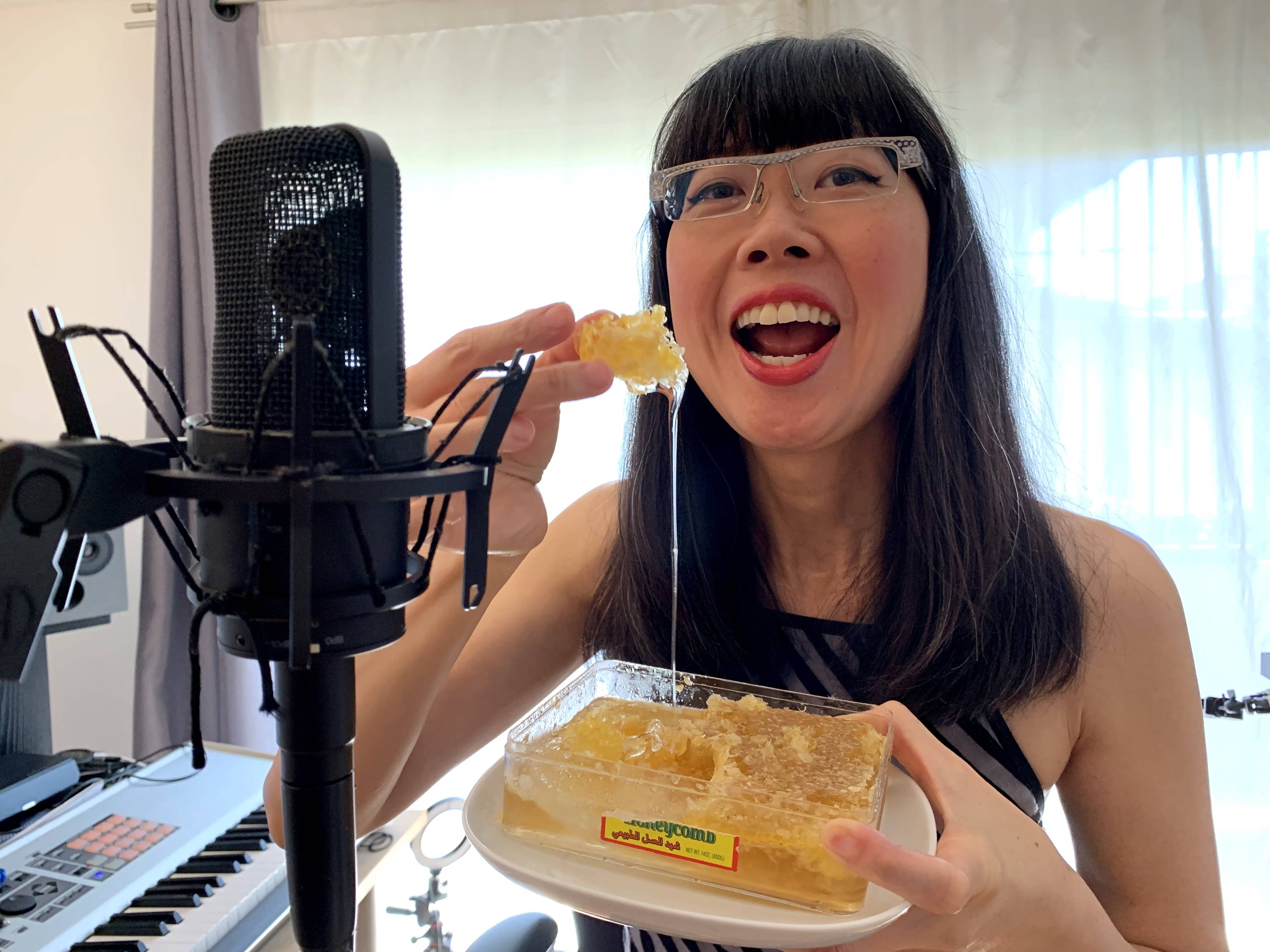 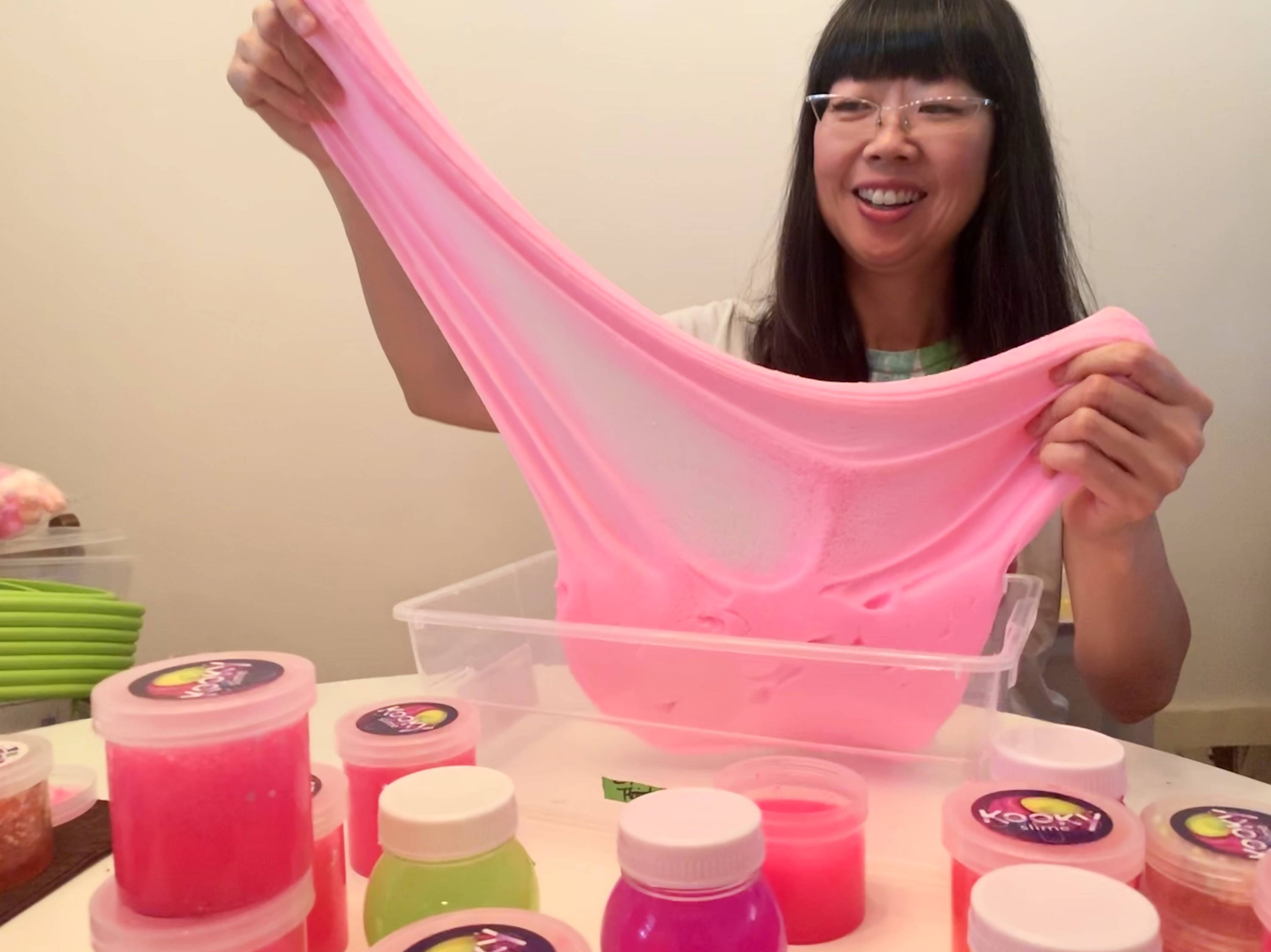 This slimer is in love with Broadway, books and anything creative. She also wrote our original Sloomoo song now available in the Tik Tok library and on our site!

How did you get into song-writing and how have you combined that with slime?

I’ve been playing piano since I was 4, and I’ve always had melodies floating around in my head. Once I started recording them and turning them into songs, everything just clicked. It was like, ‘Oh, this is what I’m supposed to be doing.’ It’s such an innate part of me; composing is how I harness that creative energy and share it with other people. I wrote the music for one of my slime-lapse avalanche videos and that turned out great. I’d definitely like to do more of that, but it’s time-consuming. I think an extended video with lots of different avalanches and music together would be so fun to watch.

What books or artists inspire your work? What is your ideal song-writing and slime-making setting?

Yayoi Kusama, Takashi Murakami. Their work has so many layers of meaning, but it’s also immediately accessible for the bright colors and patterns.

My ideal songwriting setting would be a cozy recording studio filled with wonderful instruments and audio gear, with a beautiful view of nature — trees, ocean, mountains!

My ideal slime-making setting would be a huge room with tons of white counter space, modern art, and natural lighting, with plenty of storage to hold all the supplies you could ever dream of. Let’s throw in a Roomba to vacuum up all the beads I'll inevitably spill, too. Come and hang out!

What was the process of writing the Sloomoo song?

Karen and I had a long talk about our personal connections with slime and how it brought joy into our lives. I wanted to evoke the feeling of happiness and irreverence that slime brings out in me and defines the slime community as a whole. I mean, we’re all sitting around playing with a gooey substance made of glue. How crazy and wonderful is that! So I envisioned the Sloomoo song as a slime dance party, a celebration, and incorporated the elements that I felt would express that: a fusion of electronic dance sounds, horns, and slime-related vocals. It was important to me to use actual slime sounds too, so I recorded crunches, bubble pops, and pokes, and made a beat with them for the intro. I used 6 different types of slime: fishbowl, sugar scrub, floam, microfoam, jelly, and clear. The whole process has been a blast and I’m so thrilled to be a part of this incredible project!

Do you listen to music when you slime?

Yes, absolutely. I like listening to future bass or house when I slime, and I’m often dancing while I mix!

What are your favorite musicians that inspire you and your creations?

Wow, so many. This list will change if you ask me again tomorrow, but for right now I’ll say Björk (I made a Björk-inspired slime a while back), Goldfrapp, ODESZA, Sigur Ros, Robot Koch, Purity Ring, Chus & Ceballos, and Debussy.

In early 2017, a friend of mine sent me an article that featured @rad.slime and other big accounts, and that was when I saw my first slime video. My first thought was, ‘That’s weird,’ followed immediately by ‘…and AWESOME.' A few days later I was at the craft store buying glue and glitter. I think you can guess what happened after that. (Well, lots of rubbery fails, that’s what!) I’ve always been big on crafts and DIY, so it was natural for me to make it myself. It never even occurred to me to buy slime until I had already been making it for months.

Glitter brushing, pigment brushing, rainbows, and excessive use of glitter!

What do you bring to the slime community that’s different?

My account has evolved over the years, but I think there’s always been an element of trying something new and seeing how people respond to it. I used to focus mainly on crunchy slimes, but lately I’ve been more into the visual aspects, like glitter brushing. When I first started doing that, I got such a huge response and I realized that no one else was really doing that type of video, with glitter patterns. So I did a series of those, then I took it a step further and started drawing pictures with the glitter. I never know how those are going to turn out, because loose glitter is not an easy medium. The jack-o-lantern and snowman are two of my favorites!

Sometimes my weird experiments end up doing well, and I like that surprise factor. I posted my first bead brushing video on a whim, but people found it really satisfying. I’ve also posted time-lapse videos of jasmine tea pearls expanding. I didn’t think those were controversial at all, but a lot of people thought they were bugs or spiders and were freaking out in the comments.

When did you open your shop?

What’s your favorite slime and moment or memory with it? Top 3 fave slimers?

My favorite moments with slime are the ones that bring people together. Last year when I visited my family over the holidays, I made a big batch of clear slime. I brought glitter, pigment, and beads, and we all sat around the kitchen table playing. They had never experimented with slime before, so it was really nice to do that together, and to see how everyone enjoyed the colors and sparkle as much as I do.

Earlier this year, I did a sleepover with @slimeonadestand, @slime.bauble, and @milkandteaslimetime. We brought a bunch of slimes (our own and others) and just sat around the coffee table for hours trying out all the different textures--crunching, popping, and sniffing. It was an epic slime day; we had so much fun!

There are way too many awesome slimers for me to pick just 3! People in the community are creative, cool, and kind. I’m thankful to have met so many of them, whether in person or through Instagram.

SPILL THE SLIME: Tell us your worst slime-making disaster.

I once spilled a bottle of gingerbread fragrance oil onto the counter and floor, and the smell was so noxious that I felt like my nose was being attacked. It was sharp and awful. I scrubbed furiously, threw baking soda and vinegar on it, frantically Googled “ways to remove fragrance oil”. Nothing seemed to work. I opened the windows and turned on the fan, but it was a winter night so I was freezing! That smell lingered for a LONG time, long after the oil itself was cleaned up. To this day, I never set down a bottle of fragrance oil unless the cap is securely tightened.

What’s one thing the slime community would not know about you?

I’m a film and TV composer. I have been doing that for many years.

What are your future plans and goals?

To write more music for projects that touch people’s lives. To bring joy into the world through my music.